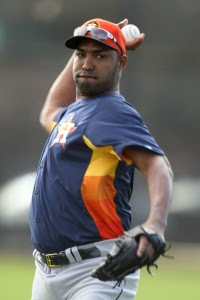 Target Jose Veras
The Astros could go down as one of the worst teams of all time. I would put the over/under on wins at 52 this year. But with 52 wins someone needs to Save 20 of those and that brings in Jose Veras. With nearly 15 other RP being picked before him who will not get more than 5 Saves, Veras is the last Closer off the board and the 45th RP being drafted.
To me a save is a save is a save and if you need, and I do mean need, a Closer late in your draft Veras will be there. Have you ever been in a draft where a Closer is going as the 45th RP off the board…me either? Look for 20 Saves and a K/9 at 9.0. To me, that’s still production and worth having in the 24th round this year. The only drawback to Veras is if he does shine he will be gone come the trading deadline. So draft him late, hope he puts up a dozen Saves by mid June then trade him to another manager before the MLB trading deadline. Remember a save is a save is a save. 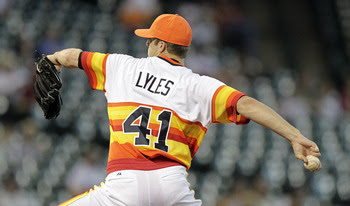 Avoid the entire Houston starting Rotation
Yes, Bud Norris can give you some quality Ks but not a single Astros SP will put up 10 Wins or have an ERA under 4.00. No value what so ever in Fantasy. I see the rotation setting up this way. Norris 9Wins 4.44 ERA, Harrell 8 Wins 4.49 ERA, Lyles 7 Wins 4.77 ERA, Humber 7 Wins 4.81 ERA, and Bedard 6 Wins 4.91 ERA. Going up against power hitting lineups like the Rangers and Angels Houston will play .200 baseball. Against Oakland’s pitching Houston’s SP will get no run support and maybe play .380 baseball. Then the improving Mariners they could go .400 on the year as long as they don’t get King Felix in every series. So avoid, avoid and avoid some more of Houston’s rotation in 13'.
Posted by Brett Barton at 6:07 PM