Pirates believe, but Yankees do not… 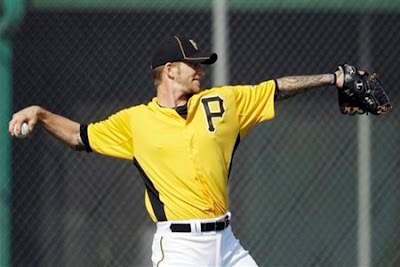 The Pittsburgh Pirates acquired RHP A.J. Burnett from the New York Yankees in exchange for Minor league pitcher Diego Moreno, and OF prospect Exicardo Cayones. Pittsburgh will acquire $13MM of the remaining $31.1MM left on the contract. I believe the Yankees may have figured out, signing big names that only have a great contract year, and subject to BUST, and are not always worth the money. In baseball and only in baseball do I believe the players truly due earn the money, that being said some of today’s contracts are by far ridiculous; what I mean is, they earn there way to the big leagues through roughly 4 levels of minor league ball, even after college do most players go through minor league ball.

This may be just what Burnett needed, after all why turn down a trade to the Angels, and go to Pittsburgh? I hear Mrs. Burnett is afraid to fly, big deal! Anyways, A.J will more than likely get the ball opening day, and will more than likely have more favorable numbers than he did his last 3 years in New York. He has an overall record of 121-111, and pitching in 13 seasons, and some people would say 10 seasons, he has had 9 seasons of being a 10+ game winner. He has struggled with staying above 200 IP, as he has only accomplished that task just 4 times. Burnett is coming off an 11-11 season, with a 5.15 era a career second worst ear, only compared to 10’ where it was 5.26. Burnett gave up 190 H and allowed 31 HR.

The Yankees received prospect OF Exicardo Cayones, and his 3 yr stint in the minor leagues. Although spending most of his time in rookie ball, Exicardo got 11 games at the NYPL in State College. In 32 AB, he managed just 2 hits, and struck out 13 times, to bring his BA down to a measly .063. His totals from rookie ball 09’ decreased in 10’. He has 471 career AB, 128 H, 68 RBI, 14 SB, and a .272 BA. I suspect Exicardo will start the 2012 season off in Low A ball with the Yankees, and perhaps might repeat Rookie ball or get sent to Arizona Fall League for some baseball rehabilitation.

The Yankees also acquired RHP Diego Moreno. Moreno who has more minor league experience than this counterpart Exicardo, it’s not much more. Moreno will be a reliever at best, if not spending his entire career in AAA. Moreno spent the 11’ season between High-A Bradenton and AA Altoona. He pitched a total record of 2-4 with a 3.63 ERA. He has been in the minors since 2007 and only pitching 194 IP, which most SP accomplish in one season. Moreno does have a good career K/9 at 9.8 and HR/9 at 0.6.
I do not see much upside here in Moreno, and perhaps that is why he was given up for Burnett and the New York did not really care who they acquired.

I do not believe the Yankees cared about what two prospects they acquired in the deal, but what was more important was how much money they would be able to save, so it looks as if Moreno and Cayones cost the Yankees $13MM. These prospects to me are nothing more than a paper weight, and I do not expect anything out of them, other than minor league career players. You will not be drafting these guys in your dynasty draft as they will more than likely just be more of a distant memory than anything.
Posted by Brett Barton at 8:55 AM