From A Bee To An Angel 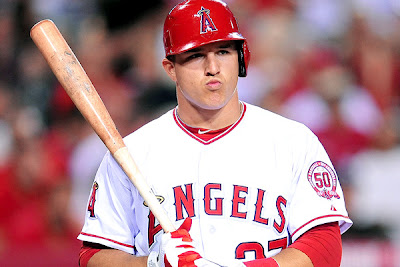 
Mike Trout has been called upon by the Angels from AAA Salt Lake. This comes hours after the Angels GM Jerry Dipoto flew to Cleveland and notified long time veteran OF Bobby Abreu he was being released by the team. Abreu was almost traded twice during the past couple weeks, once to the Yankees, and once to the Indians, however, he was retained by the Angels.

Mike Trout will be called upon to add some youth to the line up and according to the Angels, he will play every day. He will play all 3 OF positions. Trout carries a 1.091 OPS down in AAA Salt Lake, compared to any of the 4 OF for the Angels; Bourjos .512 OPS, Abreu .593 OPS, Wells .696 OPS, Hunter .760 OPS. Trout who played 20 games in AAA, played just 13 games in the OF, and none at RF. I believe Trout will only play RF when Hunter needs a day of rest.
I would like to see Trumbo and Trout play everyday for the Angels as it gives them youth, compared to Wells and Hunter, however, production is most important and Wells and Hunter have a combined 30 years, compared to Trumbo and Trout of up to 4 years. I am not a fan of Bourjos, even though he will add R, and SB. I believe Trout will be a permanent OF fix for the Angels.
Trout held a .403 BA in AAA, along with 31 H, 21 R, 4 2B, 5 3B, 1 HR, 13 RBI, 6 SB, .623 SLG, and .467 OBP. Trout should be drafted in your yahoo league immediately if he has not been so far. Trout will get his first start of the 2012 season against the Indians tonight, facing RHP Jeanmar Gomez who is 1-0 with a 1.93 ERA, and 6 K. No guarantee where Trout will hit tonight or play for that matter, however, take a look at the leadoff position thus far for the Angels, they hold a .195 BA, with .250 OBP, not exactly what you’re looking for in your leadoff hitter(s). Give Mike Trout a line of 2-5, 2 R, 1 SB for tonight.
Posted by Brett Barton at 10:07 AM

Email ThisBlogThis!Share to TwitterShare to FacebookShare to Pinterest
Labels: Rookies/Dynasty