Round The Mound We Go 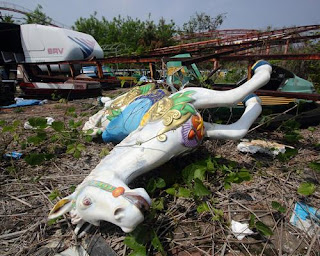 Welcome to the injured Closer Carrousel. The ride has started even before the season is underway. If you are like me in my 16 team league, I drafted Madson, Bailey and Storen. Yep, all 3 and all gone. Of course it had to happen also while I was on vacation with my wife and kids. Being gone did not give me the opportunity to be quick with the mouse and pick up any backups. In all the years I have played Fantasy Baseball I have never encountered so many Closers down for the count so early. Do not panic, there are opportunities a plenty still to be had for some vulture save opportunities. Many Closers in Waiting will be good for 8-10 saves, a few wins and a way to bolster your Ks and WHIP.
Arizona: Hernandez is a good pick up. He had double digit saves last year. With Putz at 40 years old he will not be pitching on 3 consecutive days too often so Hernandez slides in for a possible 3 saves a month.
Atlanta: Venters is only owned in 56% of leagues and had 96 Ks last year.
Baltimore: Gregg has closed before and will get opportunities this year.
Boston: Both Aceves and Melancon had to be the most added players this week. Bobby V has stated Aceves will get the 1st shot at closing. Still worth owning Melancon.
Cubs: I would avoid Wood and his 37 year old back
White Sox: I own Crain in a couple of leagues thinking he would have gotten the Closer role. I’m still keeping him through Cinco de Mayo. Ventura could mix things up early and often on the Southside.
Reds: Sorry, but I do not see Marshall and his 85 mph so called fast ball last as a closer. I figured a month ago that Marshall would lead the NL in HOLDS so I own him in a holds league but a lefty with a swooping curve ball is not closer material for the long haul. Chapman will get chances and I see Masset eventually get the closer role. That is if he can come back from a shoulder problem that has been lingering.
Cleveland: Pestano is still the favorite to close if Perez and his oblique are still a hurtin’. Pestano would be one of the first in waiting closers I would pick up due to his 11K/9 ratio. He is only owned in 24% of leagues.
Colorado: Betancourt will be on short leash so either Brothers or Belise are worth owning.
Detroit: It Valverde all the time.
Houston: Brett Myers to close…that’s why Houston is last place Houston. Look for him to get traded top a team that needs help in the rotation.
KC: Broxton and Holland have both been awesome this spring. Since I had to pick, I’m leaning towards Broxton to get 1st shot. If you can’t get one get the other. Manager Yost has yet to make a decision. In the words of Judge Smails…Well, we’re waiting!!
Angels: It Walden unless manager Scoiciapath tries to be creative for some unknown reason.
Dodgers: Guerra in April, Jansen in May, then Guerra or Jansen. Own one if possible.
Miami: Heath Bell nuff said.
Milwaukee: Rodriguez stated he wants to close until his agent shut him up. He is worth owning just for his peripherals.
Twins: Capps is bad…Minnesota is bad…Perkins is good…be ready with a quick mouse click when Capps gets replaced.
Mets: See above and replace Capps with Francisco and Minnesota with Mets then pick up Rauch…in that order please.
Yankees: Unless there is an injury you have seen this show 603 times.
Oakland: They have the true tri-fecta of closers. All will get saves and then all will be moved by the deadline.
Philadelphia: Bastardo should get some chances because the Philly’s rotation will keep them in every game and Paplebon can’t go 3 days in a row all season.
Pittsburgh: OK…name anyone else in Pittsburgh’s bullpen that is not the closer…I thought so.
St. Louis: I would own Salas by late April.
Padres: Take any SD pitcher at home. Bench them all on the road.
San Fran: All I can say is own a Giant with a beard and you will do well.
Seattle: Aren’t things just way to mellow in Seattle? Is there ever any completion for any position? When I look over their bullpen all I can muster is a yawn. Try it.
TB: Farnsworth’s elbow is barking and everyone today picked up Peralta. Just remember Rodney has closing experience. He is worth picking up for the first 3 weeks of the season.
Texas: If anybody but Nolan Ryan would have signed Nathan for that long and that much money I would have laughed. But its Ryan, I have to believe him, he knows talent.  Ogando and Adams are both waiting. It’s hard to say how long Texas will go with Nathan if he gets rocked early and often.
Toronto: I like Toronto a lot this year and if they can get 90 plus wins Cordero gets 10 Saves this year.
Washington: Storen is the man this year and for the future. He is hurt and management has stated Clippard will not get chances, they also said Bryce Harper had a chance to break camp with the team. That was just a ploy to sell an extra 1000 season tickets. I put Lidge in the closers role but I think I am going to pick up Rodriguez just in case.
Posted by Brett Barton at 8:17 PM

Email ThisBlogThis!Share to TwitterShare to FacebookShare to Pinterest
Labels: Closers