A New Face in Beantown 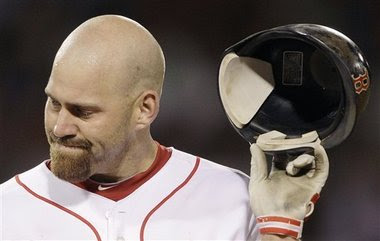 
The Boston RedSox front office continues to face a tough decision at 3B. Long time fan favorite and clutch hitter Kevin Youkilis has been weak since coming back from the DL, and has not stood up from his previous year’s numbers. Since being injured in 2011, Youkilis' value has decreased not only in Fantasy but in the RedSox eye's.
During Youkilis' DL stint, the RedSox called up young, slugging 3B Will Middlebrooks who was rated the RedSox number 1 prospect by Baseball America this year. Middlebrooks came up to the big leagues swinging just as he was doing in AAA. Middlebrooks play has fallen off a bit, due to his playing time of every other day or every two days. Since Middlebrooks has been called up he is batting, .289, with 6 HR, 23 RBI, 17 R, and 2 SB in 34 games and 128 AB's.
Those numbers of Middlebrooks being compared to the numbers of Youkilis: .212 BA, 4 HR, 13 RBI, 23 R in 38 games, and 132 AB's. Middlebrooks by far is hitting the ball much better at this point in the season than Youkilis.
The Problem:
Kevin Youkilis has a $13MM bill this year, and a $1MM buyout for next year of his contract, he has told the RedSox upper management, he refuses to play the OF. The geniuses of the RedSox place a man of $18MM in RF of Adrian Gonzalez, who is struggling at the plate, and to my guessing is due to the fact he has been playing RF more regularly than he should be.
During interleague play you have David Ortiz at 1B, Youkilis at 3B, Gonzalez in RF, and Middlebrooks on the bench; not exactly the scenario I was looking for at the beginning of the year.
The Solution:
Middlebrooks is the obvious future at 3B for the RedSox, however Youkilis is drawling little trade interest due to his 0-19 slump at the plate and his low offensive numbers, and age. If the organization continues to play with Youkilis in the lineup, they need to place Middlebrooks in LF, and continue with Youkilis at 3B, and Adrian Gonzalez at 1B and not in RF. Youkilis should be traded by the deadline and by then Carl Crawford will regain his spot in LF, while Middlebrooks should have the hot corner.
Youkilis will continue to get a look at from other trade partners as the trade deadline nears, as the Phillies, Dodgers, and Giants have all said to be suitors and I have always thought Seattle would be a great sleeper team for Youkilis to join, as they have a deep pitching depth minor league and the RedSox could always use an arm or two.
Posted by Brett Barton at 3:35 PM