Middlebrooks Now in the Beantown Mix 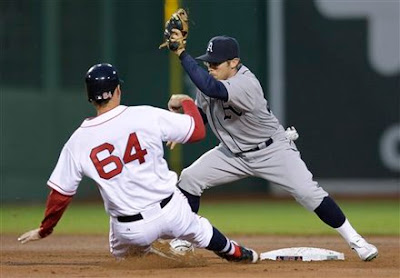 The name is Will Middlebrooks, yes Middlebrooks. For those of you who did not draft Middlebrooks in your minor league draft, you need to get on your leagues FA page and pick this player up. With veteran 3B Kevin Youkilis on the DL, Middlebrooks got the call yesterday.
Will received the call to the big leagues that every minor league player dreams of. Middlebrooks got the nod from Manager Bobby Valentine yesterday to start at 3B for the Red Sox against the Oakland A’s. Middlebrooks batted 8th for the Sox, and he did very well for his MLB debut. In his 1st AB, he drew a walk and was very patient at the plate for a rookie, while on base, he stole second base as well. With his 2nd AB, he had an infield single, and with his 3rd AB, had a double down the right field line.
Middlebrooks is being considered as a 5 tool player, and while in AAA Pawtucket this year, he proved just that. In 24 games in Pawtucket, he has 93 AB, 18 R, 31 H, 3 2B, 1 3B, 9 HR, 27 RBI, 3 SB, .333 BA, .380 OBP, .677 SLG, and 1.057 OPS.
If you had Youkilis on your team, as I did, I picked up Middlebrooks right away as soon as I heard he had been called up. Nick Punto might receive a hand full of games at 3B with Youkilis on the DL; however, I believe Bobby V and Ben want to get the best view of Middlebrooks now. Youkilis is in the last year of his current contract, and perhaps his final year in Boston. It has been a long, long time since Boston has produced a pure power hitter, let along a 5 tool player.
Middlebrooks was called up, as prospect failure Lars Anderson has failed to produce during his pinch hitting duties in close game situations. Amazing how Oakland wanted Anderson last year for Rich Harden, and turn around this year, and wanted Reddick instead. If you have Lars Anderson on your minor league roster I would cut him and start preparing for your 2013 MILB Draft. No one should have Anderson on their current MLB roster. Middlebrooks most likely will not stay in Boston all year, just do to the fact of Youkilis coming off the DL and keeping his fresh bat in AAA where he can receive up to 500 AB’s in Pawtucket. Middlebrooks should see the starting gig next year in Bean town.
Posted by Brett Barton at 8:18 AM

Email ThisBlogThis!Share to TwitterShare to FacebookShare to Pinterest
Labels: Rookies/Dynasty