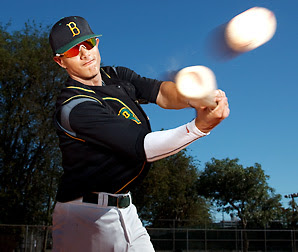 Manny Machado top’s today’s prospect list for the Carolina League. Machado was the highest Orioles draft pick since 1989, drafted 3rd overall, out of Brito Miami Private (High School). Machado has pre-mature body, and athleticism of an Alex Rodriguez.
Machado spent his 2011 first season in Low-A Delmarva and High-A Frederick. If any of you are ‘signers’ you know Manny was not the easiest to deal with. Manny is what us signers call a ‘one per’. He simply would sign only one thing a night for any particular fan. If you had 3 items, you would have to go see the 3 games home or away stand. Although Manny was very particular about this, he kept to his word, and sign for most if not all the fans he could.

Manny played in my backyard for the 2011 season. His Delmarva shorebirds visited the Hagerstown, MD area, where they battled the Hagerstown Suns, and 1st overall draft pick Bryce Harper. During his stint with Delmarva for a full 38 games, he hit .276, with 6 HR and 24 RBI’s. Machado’s Low-A performance earned him a spot on the 2011 Futures Game roster. Manny struck out just 2 times more (25), than he allowed himself taking ball 4(23).
After 38 games with Delmarva, he earned a promotion to High-A Frederick. This ballpark once again is in my backyard (only 20 miles). At this point, he was the youngest everyday player in the Carolina League, and it showed. His first month up, he went a measly 14 for 63, with only 4 extra base hits. He finished the season with a .245 BA, hitting just 5 HR and knocking in 26 RBI. Manny only managed to steal a total of 11 bases during the 2011 season.

A potential 5 tool player at a crucial position defensively, and most captains spots on the field, Manny will need to build confidence and continue to pursue his way up through the minors. Manny has good plate discipline, with a fluid swing; the K to BB ratio will need to be looked at more carefully through game tapes. Manny will most likely start the season again in the Carolina League in Frederick, not only to increase his numbers, but because the O’s have a hole until the end of 2014 with J. J. Hardy.
Posted by Brett Barton at 7:56 AM