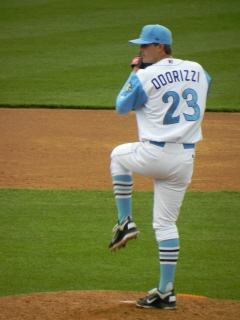 Jake Odorizzi was the center piece that sent SP Zack Greinke to the Brewers in exchange for prospects. Odorizzi was ranked high in an organization at the time with the Brewers that had little to no depth in it. He has the potential to be an Ace of the starting staff for Kansas City; however, I am sure KC would be thrilled with him settling in nicely in the two or three hole. He has up to a 4-pitch sequence, with his main pitch being his fastball that still sits in the mid 90’s. His curveball could be the next best pitch in the sequence, which is followed by a sub-par change up, and a slider. He does have a cutter; however, it can often be confused with the slider, as far as we go, the slider and cutter are the same pitch.
Starting out the 2011 season pre-ranked as the #33 overall prospect by Scouting Book.com, he started in the Carolina League in Wilmington. I met Jake in Frederick, MD where he was visiting the Frederick Keys. His W-L record of 5-4 makes his numbers look worse, than what they are. In the 5-4 record, he pitched 78 innings of work, striking out 103 batters. This led him to a K/9 ratio of 11.8. Jake walked a measly 22 batters and only allowing 4 HRs.
After 15 games, he was promoted to AA Northwest Arkansas. They say if you want a pitcher or hitter to see what he can do at the MLB level; the best competition is in AA. This may be true as most if not all his stats doubled or decreased in half. He went 5-3 with a 4.72 ERA. Jake’s K/9 ratio dropped to 7.1. He was hit around pretty good in Arkansas, as his home runs allowed tripled to 13. He will most likely be back in Northwest Arkansas to start the 2012 season, and finishing in AAA, if all goes well.
He has defiantly made a name for himself, not only in the Kansas City organization, which is already loaded with talent, but, he has made his name known to others like you and I who will need his help in the near future. Odorizzi will not be taken off the draft boards in any MLB draft; however, he will be taken off the draft board in your dynasty draft. Pay close attention to his forcible future, as you will want to snag him off waivers once your league places his name among the other FA’s. My Predication: June Call up 2013
Posted by Brett Barton at 9:17 PM