Coming off one the most exciting and dramatic final days in baseball history, the Rays are poised to repeat their flair for the dramatic. The acquisition of former Ray Carlos Pena brings a better glove and OBP than Casey Kotchman at 1B this year. The rotation is scary good and is actually 6-7 deep. I see Niemann being the odd man out after spring training. ROY candidate from last year Desmond Jennings will show Tampa fans why they let Crawford go so easily last year. The biggest problem as always in Tampa is the division they play in, that means seeing the Yankees and Red Sox 36 times again this year. I won’t count Tampa out of the race until they are mathematically eliminated.
TARGET
Matt Moore SP 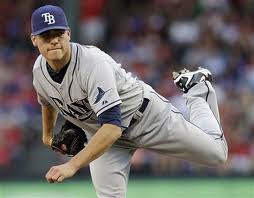 You may never see again a SP with one start under his belt be the starting pitcher in a playoff game but that is exactly what Moore did last year. The Rays even forked up 39M for a SP with just over 9 career MLB innings. His strengths are  a career 12.2 K/9 ratio throughout his minor league career there is reason to think he cannot bring that to the majors full time this year. The downside to Moore is that he pitches in the toughest hitting division in baseball. Another point to be aware of is that if Tampa is out of the race due to a major collapse the Rays will shut him down in September.  He will be a SP that others will be hesitant to draft in the first dozen rounds but I am targeting him in round 8-10. My projections are as follows: 12W/3.29/1.21/181 and ranked 110 on my 300+ player projections for 2012.
AVOID
James Shields SP 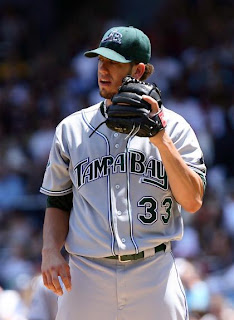 After a stellar 2011 he entered the ALDS with Tampa up 1 game to 0 on Texas. What happened may be due to the numerous innings he put in throughout the year.  His 249 innings was 2nd only to Verlander. In the playoffs he became uncharacteristically wild plunking couple on Rangers and throwing some wild pitches. Did the massive innings total and his 11 CG hurt him? I believe so. When a young pitcher surpasses his career limits in innings pitched we must be concerned the next year. Was 2011 a career year for Shields? I say yes. He was rarely even drafted in leagues last year and that was because he had an ERA well over 5.00 in 2010. I’m not saying he is going to be that bad but I am also saying he is not going to be as good as 2011. He is definitely usable in all leagues, just do not draft him too early to anchor your team and do not expect a sub 3.00 ERA and a 1.04 WHIP ever again. My projections are as follows: 15W/3.77/1.16/191
Posted by Brett Barton at 8:10 AM