The Oakland A’s have cleaned house this winter like no team has in recent years. In the process they picked up many of the games top prospects. Though I do not think the A’s will win 60 games this year they are still a MLB team with players that can help our Fantasy Teams.  There may not be a single A’s player before the 20th round in any type of fantasy league this year but 1 SP is worth a late round flyer, especially in Dynasty or Keeper Leagues.
TARGET
Jarrod Parker –SP 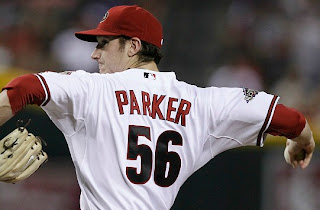 Parker was the star blue tip return in the Trevor Cahill trade. He was the 9th overall pick in the 2007 draft. Coming off TJ surgery a couple of years ago he was able to pitch and pitch effectively in 2011. He not only pitched well he lost no velocity off his 94 mph fastball after his surgery. He has 3 quality pitches; Fastball that is hard sinking, Change-up that is 12 mph slower than his fastball; a pitch sure to keep hitter of balance. His slider is practically a splitter, and his Curveball has only been used sparingly but it does bend from head to strike zone on right handed hitters. Last year’s number in AA were impressive. He had a 3.79 ERA 112/55 K/BB ratio over 130 innings.  He should project as the A’s 4th or 5th starter. If he shakes out to be the A’s 5th starter he may not get drafted due to not having many starts in April but you should have him on your radar. Come the 3rd week of the season when all 5th starters fill in their rotation spot every week he will be off the wire.  My projections for him are: 10W 3.98 ERA 1.29 WHIP with 119 Ks.
AVOID
The Entire A’s Bullpen 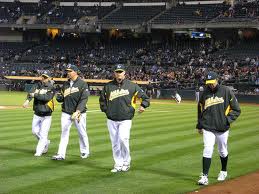 The problem with the A’s bullpen is anyone and everyone can and will close games. I see Billy Beane showcasing any player that other teams are inquiring about throughout the season. I wouldn’t even trust any of their bullpen in Holds leagues. It’s just to volatile to know when Beane will pull the trigger on anyone and everyone in the bullpen. The fire sale is still continuing in Oakland and will last until Oakland moves to San Jose and they get a REAL ballpark. Here is the A’s Bullpen to date. I don’t envision half these players being here by the end of the year.
Grant Balfour, Fautino De Los Santos, Brian Fuentes, Josh Olson, Neil Wagner, Jerry Blevins, Graham Godfrey, Andrew Carignan.
Posted by Brett Barton at 9:59 AM