The Rangers have been a perennial dominate team for the last few years. With the possible addition of Yu Darvish and Prince Fielder some players will get a bump up in value while others will get a knock down in their fantasy worth. Regardless of the two previously mentioned players, the Rangers scored the 3rd most runs in baseball in 2011. I see them even garnering a few more wins this year to push them over a 100 win season and still beating the new Pujols bolstered Angels.
TARGET
Joe Nathan-Closer 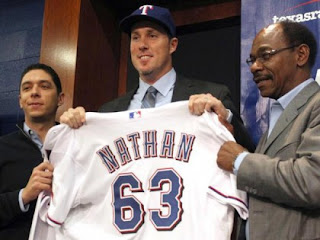 Though he had a +4 ERA last year, over all his final 31 appearances he had a 3.38 ERA with 29 Ks and only 5 BB. As you know he has a career 2.87 ERA with a 1.11 WHIP and has a K/9 well over 9. Those are still staggering numbers for a closer. One of my favorite stats that Nathan has posted is a career BAA of .202; as long as he has his control (doesn’t walk anyone) no one hits this guy. IMO he probably came back too early last year and tried to prove too much. Now he is on a better team with many more Save chances while pitching against Oakland and Seattle 36 times next year. He could have 20+ Saves against those two teams alone. Nathan will fall lower in drafts than he should with the impending Feliz to the rotation talk. Nolan Ryan signed this guy for 15 million of 2 years…He IS closing in Texas case closed. My projections for Nathan are as follows: 3W 38S 3.25ERA 1.11WHIP 69K.
AVOID
Michael Young-1B & 3B 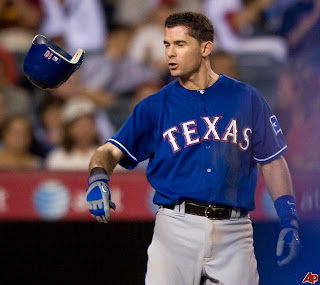 The main reason I am avoiding Yong this year is due to the loss of 2B eligibility. The numbers he put up in the past were well above average for a 2B but I want my 1B and 3B to be able to put some more power numbers. Yes he had over 100 RBI last year but he projects to hit in the 2 hole this year and DH which will drop his RBI production, even for the happy hitting Rangers.  His RBI numbers were helped by him having over 200 hits last year. Only 5 players have had over 200 hits in a season over the age of 35 in the last 50 years: Paul Molitor 2X, Al Oliver, Bill Buckner, Pete Rose 3X, and Tony Gwynn.  Does he get his 200+ hits again at 35 years old in 2012? History says it is unlikely. So if you draft Young and have to use him at either corner expect these types of numbers: 85R, 11HR, 88RBI, 6SB and hitting .311 good numbers but they can be had by Davis Freese at 3B 8 rounds later or Gaby Sanchez 1B 10 Rounds later.
Posted by Brett Barton at 11:10 PM